Folksongs and Myth of the Bulang ethnic group in Xishuangbanna (Yunnan, China)

The Bulang ethnic group (Bulang zu) are distributed in the mountainous areas along the middle and lower reaches of the Lancang River (Mekong) in the west and southwest of Yunnan Province. They mainly live in the mountainous areas of Bada, Liangding, Daluo and Bulang Mountain in Menghai County, Xishuangbanna Dai Autonomous Prefecture. 36,000 Bulang live in Xishuangbanna, representing 3.67% of the population, and are mainly distributed in Menghai county; in particular, more than 60% of Bulang people live on Bulangshan (Bulang Mountain), a mountain that has become renowned for its Pu’er tea.

The Bulang, like the De’ang and the Wa, are considered to be descendants of an older ethnic group, who lived in the Lancang River valley in ancient times, known in Chinese historical records as the “Pu” or “Pu man”. Because of their isolation in mountain areas, this minority group has preserved their culture and traditions for a long time.

The Bulang language spoken in Xishuangbanna is a Palaungic branch of the Mon-Khmer language family. Some Bulang people can speak Dai language. The isolation of Bulang communities and the consequent proliferation of different dialects makes mutual linguistic understanding very difficult and complex, which is why they use Mandarin Chinese (Putonghua) as a lingua franca to communicate between people coming from different mountainous regions.

A common cultural trait of the Bulang living in different villages is that songs continue to play an important role in their present-day lives as well as an important way of passing on the traditional culture. In fact, Bulang people do not have a written language, since their culture is characterized by oral tradition, but they have a rich oral literature based on myths and legends.

From the tenth century, Bulang communities have converted to Theravada Buddhism under the influence of Dai who ruled the area for centuries before the Han moved in (“Pazhao” is the name for Buddha in both Bulang and Dai language). Nevertheless, Bulang traditional beliefs draw on a mixture of ancestor worship, polytheism, and Theravada Buddhism; practices associated with ceremonies of the agricultural cycle and Buddhist beliefs are often intertwined in syncretic forms; for instance, chanting Buddhist sutra and sacrificing chickens are meant to guarantee a successful harvest.

Buddhist temples can be found on the top sites of almost every village, and each temple has got its own “big drum” (dagu in Chinese), a red barrel drum made of wood with two cow skins, usually placed outside the main hall of the temple. A goblet single-headed drum, called in Chinese xiang jiao gu (“elephant-foot drum”, named for its shape) is used to accompany the ritual dance (zai beng) during religious festivities. The elephant-foot drum, widespread in the Xishuangbanna and Dehong regions, is not peculiar of Bulang musical culture but it was borrowed from the Dai. During the performance into the temple courtyard, the male dancers-percussionists usually carry the elephant-foot drum on their left shoulder and beat the head of the drum with their hands and fingers. Other two male percussionists play a gong and a pair of cymbals.  The performers are arranged in two concentric circles: the inner circle is made up of male percussionists who rotate counterclockwise, while in the outer circle the female dancers rotate clockwise, waving their arms upwards.

Bulang music, in general, can be divided into two broad categories according to their use and function: folk music (suo), played in private houses, and ritual music (zai zhong) performed in Buddhist temples. According to the musical form, Bulang traditional music includes basically three domains: folk songs (suo), dance songs (zai beng) with a response of a chorus accompanied by percussions (called in Chinese guge; gu: drum; ge: song, chant) while dancing in circle in the temple, male and female duet in call and response pattern (se pai zai), and the religious sacrificial songs (zai zhong) performed in the temple.

In Bulang language, “zai” means also ‘singing’ and folk songs are the most relevant of the Bulang musical forms and repertoires. Bulang folk songs consist of songs which are not accompanied by any musical instruments, such as zhuai, zai, tong ma, or songs, like the suo and sheng, accompanied by a four-string plucked lute (ding qin, commonly called ding), a guitar-like wooden lute with two double strings (usually tuned Bb and Eb).

The ding is peculiar of the Bulang musical culture but it is similar in shape to the chiben used by the Lisu, a Tibeto-Burman ethnic group who inhabit mountainous regions along the border of Myanmar in Yunnan Province.

The singing form is generally one person solo, two people duet (a man and a woman) alternating each other or singing together (in homophonic style), and occasionally two choirs (men and women) in antiphonal form.

The dialects of the Bulang settlements are quite different, so the classification methods or names of the songs are also slightly different from a village to another. This article will introduce the classification method of Manxi village (Daluo Town, Menghai County in Xishuangbanna, Yunnan Province). In Manxi village, we have interviewed and filmed the performances of three Bulang traditional musicians esteemed by the local community as renowned local tradition-bearers, cultural heirs, and who became our key partners during our fieldwork: Ai Sai Zhan, Ai Wen Lun and Yu Kan La.

Bulang songs are monodic, and generally based on pentatonic scales. The vocal style is characterized by a narrow melodic range within an octave. Folksongs are sung by one or two singers in a duet (male and female) in monodic style. The traditional repertoire of the Bulang people is mostly folk tales and myths and legends, but the repertoire of the Manxi’s musicians includes also wedding songs (zhuai), welcoming songs or songs to praise the guest (zai), songs of loss (zai mi), Spring festival songs (zai beng),children’s folk rhymes (zai muli muran), tree-felling songs (zai wa), worship songs (zai mu), duet love songs (se pai zai and suo) and ritual songs to Buddha (zai zhong).

All the songs are sung by one or two singers of opposite sex alternating, accompanied by the ding, whose function is to repeat and emphasize the pentatonic melody of the song. The ding is the only melodic instrument used to accompany traditional songs and is played only by male musicians. Bulang singers compose new texts on existing tunes inherited by the elder musicians. The lyrics are new creations, while the melodies are maintained, unchanged over time.

The repertoire of these village-born singers includes mostly love songs. Lullabies are sung on the same melodies but in a slow tempo. Bulang songs are monodic, and generally based on anhemitonic pentatonic scales; folksongs are sung by one or two singers (male and female) in monodic style and the vocal style is characterized by a narrow melodic range within an octave.

The ritual song called zai is in responsorial form (solo-chorus) with the accompaniment of percussions and it is performed only in the temple during the Anju Buddhist festival. The ritual songs performed in the temple are characterized by the response of a homophonic chorus playing drums and cymbals and dancing in circles.

There are many myths that explain the features of different animals, and the relationship that they have with Bulang people. Music and myth are tightly connected in Bulang musical culture too, although most of the mythological and epic songs have gradually disappeared with the death of the old singers. According to a legend told by Ai Sai Zhan, in ancient times, the ancestor of the Bulang clans, Zao Suo, wanted to find a rhino hidden (shēng) in the jungle to ride and thereby acquire distinguished status. He went to the Bulang people to ask for help (zhuāi) finding the rhino. He looked for (suǒ) a boy (zǎi) who was able to tie it (tóng mǎ). Some of the recurring terms in this short epic story correspond to the names of the five musical genres of the Bulang according to the classification method used by their own ethnic group: 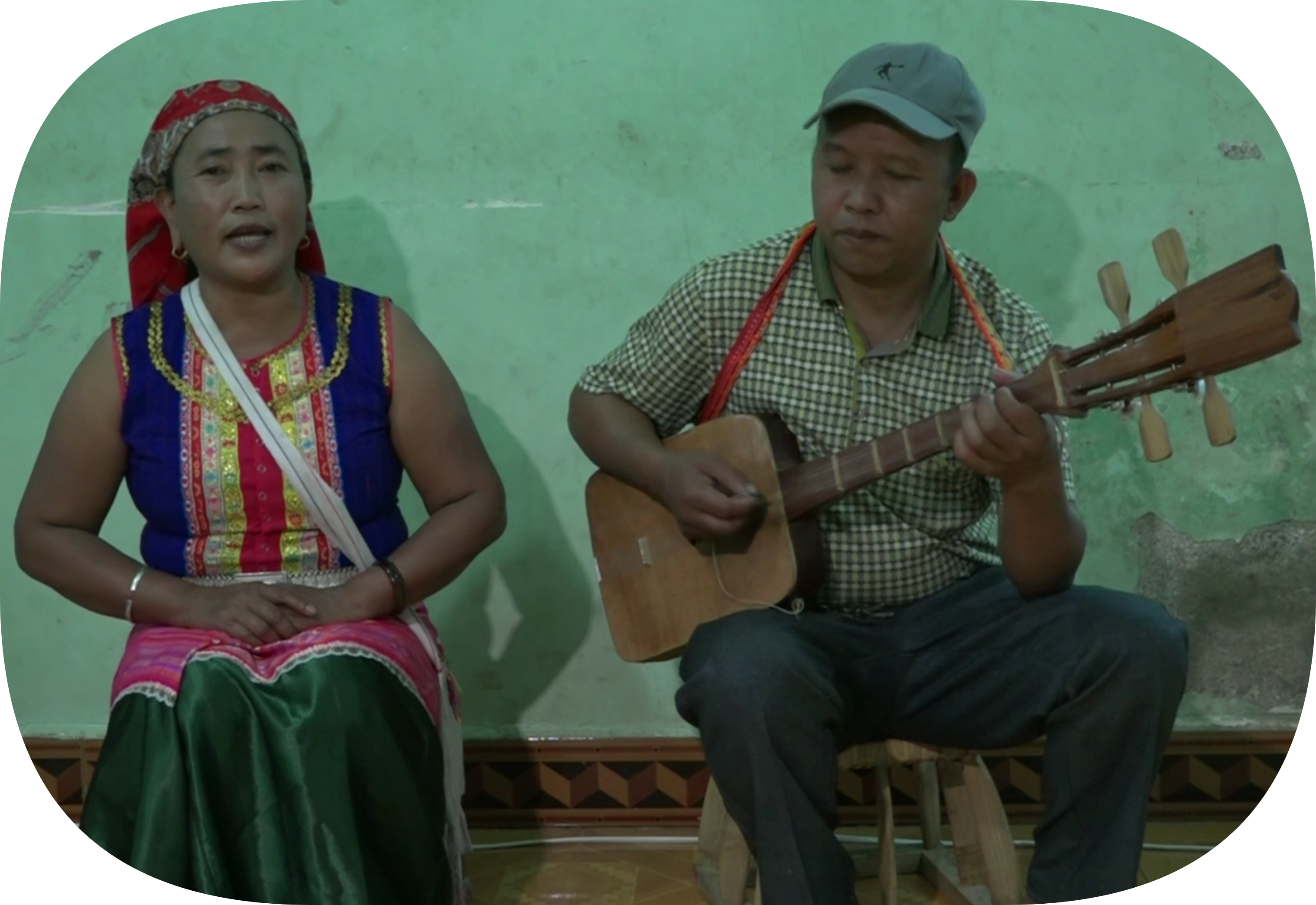 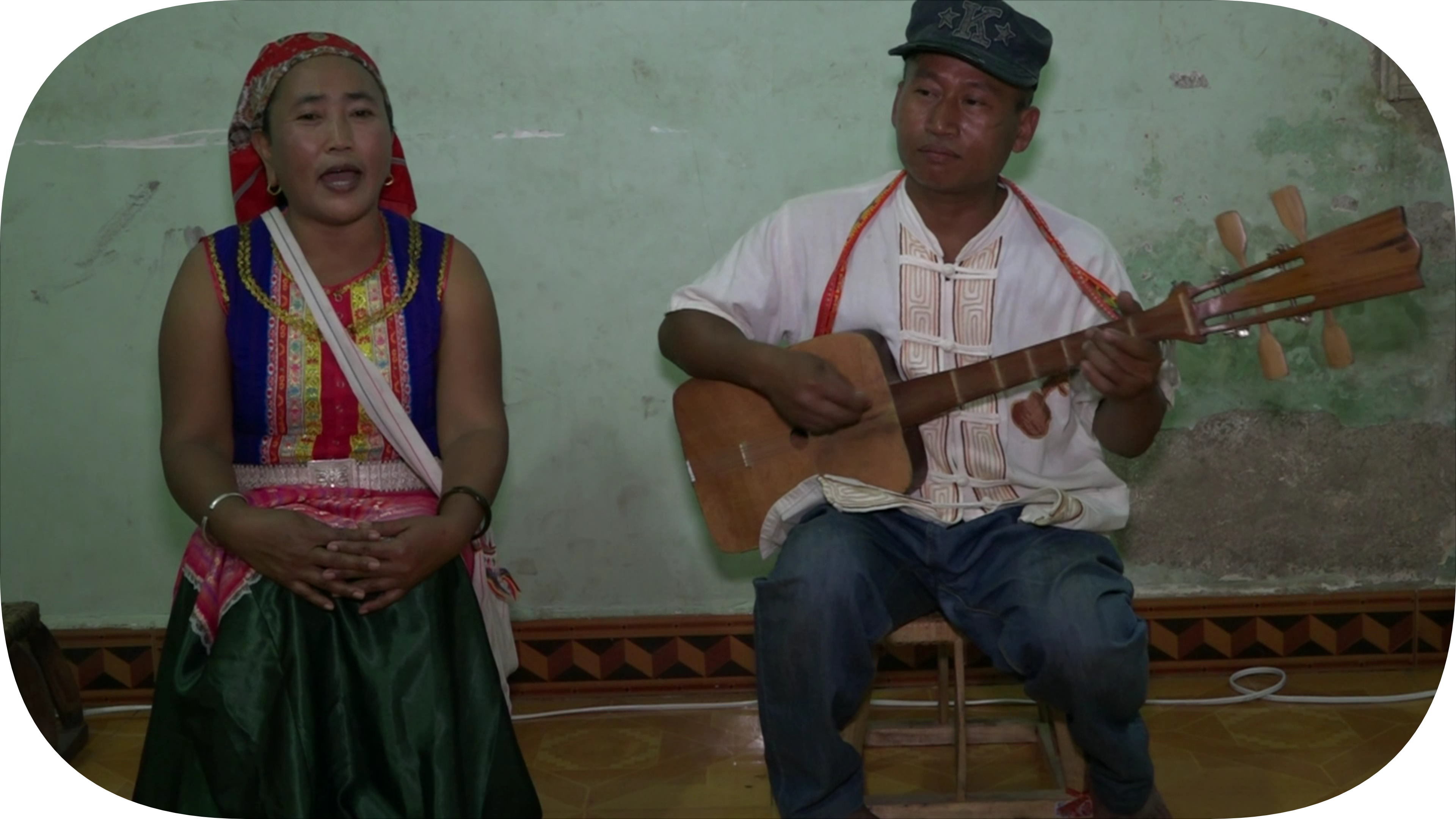 Yu Kan La, Ai Wen Lu and Ai Sai Zhan are active with social activities in their own community to preserve and transmit Bulang traditional repertoire. In her village and in neighboring villages, Yu Kan La teaches orally transmitted traditional songs and dances to the young generations. Since 1982, she taught about 300-400 people without ever receiving any remuneration; at the moment she has got 60 students – all girls, mostly Bulang, but also including a few members of other ethnic groups such as Han, Dai and Hani – called “Little Flower Group” (Xiǎohuā duì). Yu Kan La was also the protagonist of a short documentary about the transmission of Bulang musical heritage to the young generations broadcast by Yunnan Television (YNTV).